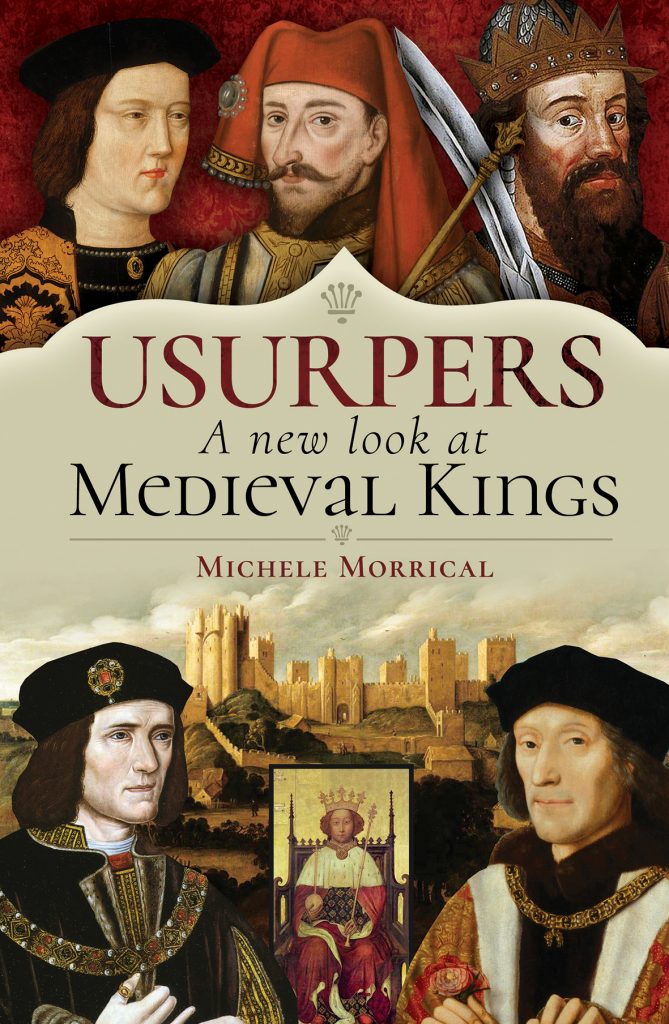 Buy on Amazon
In the Middle Ages, England had to contend with a string of usurpers who disrupted the British monarchy and ultimately changed the course of European history by deposing England’s reigning kings and seizing power for themselves. Some of the most infamous usurper kings to come out of medieval England include William the Conqueror, Stephen of Blois, Henry Bolingbroke, Edward IV, Richard III, and Henry Tudor. Did these kings really deserve the title of usurper or were they unfairly vilified by royal propaganda and biased chroniclers? In this book we examine the lives of these six medieval kings, the circumstances which brought each of them to power, and whether or not they deserve the title of usurper. Along the way readers will hear stories of some of the most fascinating people from medieval Europe, including Empress Matilda, the woman who nearly succeeded at becoming the first ruling Queen of England; Eleanor of Aquitaine, the queen of both France and England who stirred her own sons to rebel against their father, Henry II; the cruel and vengeful reign of Richard II which caused his own family to overthrow him; the epic struggle for power between Henry VI, Margaret of Anjou, Richard of York, and Edward IV during the Wars of the Roses; the notorious Richard III and his monstrous reputation as a child-killer; and Henry VII who rose from relative obscurity to establish the most famous royal family of all time: the Tudors.
Book Details

From the Norman Conquest in 1066 to the epic Battle of Bosworth in 1485, England saw no less than six usurper kings – men who deposed the reigning kings and unlawfully seized the throne for themselves, including:

The reader might be surprised to know that not all these kings were really usurpers, at least not in this author’s opinion. The purpose of this book is to correct popular misconceptions and long-held beliefs about these six kings who have been traditionally labeled as usurpers but as the evidence shows, not all are deserving of that title.

Michele Morrical is a historical nonfiction writer from Indiana, USA, who researches and writes about medieval kings and queens in England, specializing in the period known as the Wars of the Roses and the ensuing Tudor Dynasty.

Michele’s first book entitled “Usurpers: A New Look at Six Medieval Kings” is set to be released in September 2021. Michele also hosts a  Tudor Blog in which she analyzes facts and fallacies that have been written about medieval England.

Michele holds a Master’s degree in Business Administration and works as a Digital Marketing Manager in the automotive industry. In her spare time, she enjoys reading (of course), gardening, and spending time with her family, including her husband Mark, son Thomas, and daughter Julia.

“I truly can’t wait to read more of your work! Even though I love Tudor (Plantaganet) history, sometimes it can be an overwhelming read, but Michele’s writing style was easy to read, understand, and follow. Yours was awesome!”

“What a well written and interesting piece. Oftentimes, I find this type of “backstory” to be a bit tedious to read, but Michele Morrical’s writing style was easy to read, understand, and follow.”