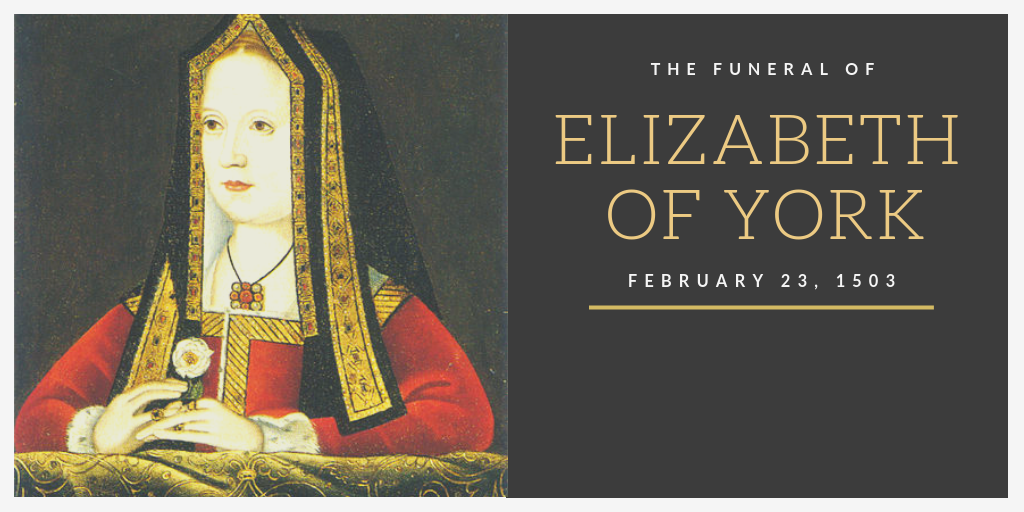 The Funeral of Queen Elizabeth of York

The Funeral of Queen Elizabeth of York, Queen Consort to King Henry VII, occurred on February 23, 1503 in the Lady Chapel at Westminster Abbey. She had died just 12 days earlier (on her 37th birthday) from post-partum complications. Sadly, Elizabeth’s newborn daughter Katherine also died 16 days after the birth.

King Henry VII was devastated by the loss of his wife, as were their children Henry, Mary, and Margaret. Just one year prior, King Henry and Queen Elizabeth had lost their eldest son and heir Prince Arthur to a sudden illness. Now the loss of his beloved wife was nearly unbearable. Henry ordered his council to take plan his wife’s funeral arrangements and he went into seclusion.

The funeral for Queen Elizabeth was an expensive affair befitting a queen of her status. Her coffin was draped in cloth-of-gold and watched over for 9 nights by her ladies in waiting, four

gentlewomen, two officers of Arms, and seven yeomen and grooms. Daily masses were sung by abbots and bishops. The coffin was drawn to Westminster Abbey by six horses draped in black velvet. Her eight ladies-in-waiting rode behind the coffin on palfreys also draped in black velvet. Behind them in the funeral procession there were hundreds of people, including noblemen, foreign dignitaries, and regular citizens of London. Their path was illuminated by 5,000 torches as well as candles held by thirty-seven virgins dressed in white.

Once they arrived at Westminster, Elizabeth’s coffin was placed by the high altar surrounded by 1,000 candles. On Elizabeth’s head was placed a very rich crown and each finger wore a ring of gold and precious stones. Her body was continually watched over by members of the royal court who would sing and pray for the Queen’s soul. Before the final burial, her ladies would further drape her coffin with thirty-seven pieces of cloth-of-gold. After she was lowered into the grave, her attendants followed tradition by breaking their staffs of office and throwing them into the grave symbolizing the end of their service to the beloved queen.