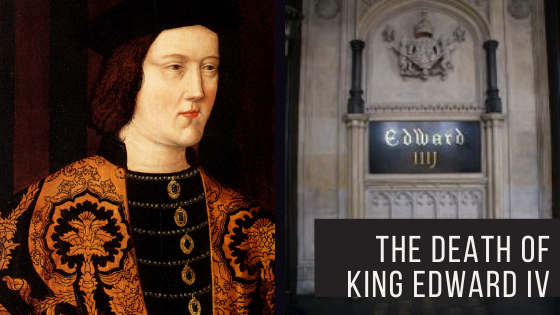 Edward became the de facto leader of the House of York after the death of his father Richard, Duke of York, at the Battle of Wakefield. The entirety of Edward’s years as ruler were marred by the Wars of the Roses and repeated deceptions by his brother George, Duke of Clarence, and his uncle Richard Neville, Earl of Warwick, popularly known as the Kingmaker for his role in winning the throne for Edward. He lost his throne in 1470 after Warwick defeated him in the Battle of Losecote Field, but then won it back after defeating Warwick in the Battle of Barnet, followed by another Yorkist victory over Queen Margaret’s army at the Battle of Tewkesbury.

The exact cause of King Edward IV’s death is not certain. He was on a fishing trip on Good Friday, March 30, 1483, when he was stricken with a sudden illness. He took to his bed at Westminster Palace and died ten days later. Some writers at the time believed his fever and chills indicated malaria or pneumonia while others believed he had suffered from a stroke. After his death his brother Richard usurped the throne from Edward’s eldest son and heir, Prince Edward, and then lost the throne two years later to Henry Tudor at the Battle of Bosworth.