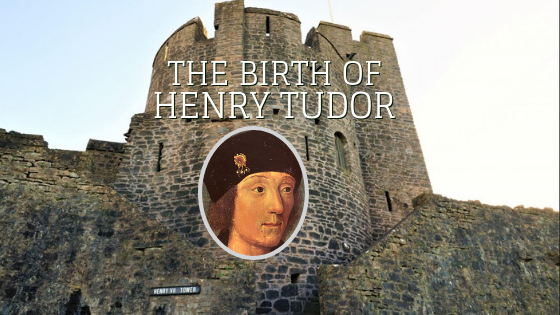 The Birth of Henry Tudor

On January 28, 1457, Henry Tudor, the future King Henry VII of England, was born at Pembroke Castle to a widowed young teenager named Margaret Beaufort. Margaret was not only the richest heiress in England but could also claim the royal bloodline of King Edward III through his son (her great-grandfather), John of Gaunt.

In the spring of 1453, when Margaret was only 10 years old, King Henry VI arranged for her wardship to go to his half-brothers, Edmund and Jasper Tudor, presumed heirs to the childless Henry VI. As Margaret Beaufort’s new keepers, Edmund and Jasper were responsible for overseeing her territories and finances, as well as her upbringing and well-being, until she became old enough to be married off.

Wardships were very typical for noble children in the middle ages. They were so incredibly profitable that many noblemen paid for the right to possess a ward not just to reap the profits of their lands but also to be able to marry them off to their own children.

And that’s exactly what happened to Margaret Beaufort. When she was 12 years old it was decided she was old enough to marry and her husband would be the eldest Tudor brother, Edmund. They were married on November 1, 1455, at Bletsoe Castle, the childhood home of Margaret Beaufort. Edmund was twenty-five years old, more than twice Margaret’s age.

Shortly after their November 1, 1455 nuptials, Edmund Tudor was called to Wales to repress Welsh leader Gruffydd ap Nicolas who had taken possession of several of the king’s castles in Wales. When Edmund left Margaret to go fight Gruffydd ap Nicolas, he was probably unaware that he had successfully made his young bride pregnant.

Marriages usually weren’t consummated until the bride was fourteen years old but Edmund may have been anxious to get a child by Margaret. Doing so would have granted him lifetime rights to her estates upon her death, even if it meant endangering his young bride’s health. Margaret was small and underdeveloped for her age so a pregnancy was a very dangerous situation for her.

At Wales in August 1456, Gruffydd surrendered Carmarthen Castle to Edmund Tudor and pledged obedience to his new overlord. But Edmund’s job was not over. Since he was ordered to uphold the king’s authority in Wales, he also had to deal with an insurgence of Yorkist rebels, led by William Herbert, Walter Devereux, and Roger Vaughan. The three men were trying to get a foothold in Wales for Richard, duke of York, who had been serving as King Henry VI’s Protectorate until he was ousted by Queen Margaret of Anjou.

On August 10, 1456, the Yorkists seized Carmarthen Castle and imprisoned Edmund Tudor there. At some point over the next few months they did release him, perhaps because of his declining health, but apparently he didn’t make it far. He died at Carmarthen Castle on November 1, 1456, which was also his first wedding anniversary. There is no record of his cause of death but it is widely believed he was a victim of the plague.

At the time of Edmund’s death, Margaret was 13 years old, seven months pregnant, and alone in Wales, far from her home. As if being young, widowed, pregnant, and in danger of contracting the plague wasn’t enough, she had even bigger worries on her hands. Her husband, a loyalist to Henry VI and the Lancastrians, had just met his end at the hands of the duke of York. It was absolutely inevitable that they would go after Jasper next in their attempt to eliminate all of Henry VI’s heirs. Margaret Beaufort’s unborn child would be next in line after Jasper. She was understandably terrified and feeling vulnerable, she fled to her brother-in-law Jasper Tudor at his castle of Pembroke and he took her under his protection.

The Birth of Henry Tudor

Two months later, on a cold January night, Margaret gave birth to her first and only child, a son. Jasper wanted to name the baby Owen after his own father but Margaret insisted on naming her son Henry in order to honor King Henry VI. Henry inherited his late father’s title, earl of Richmond, and Margaret was determined to see that he got what was due to him.

The birth was a very difficult one and would scar her forever. For a time they believed that she and her unborn child would perish. Not only was she very young but she was also slight of stature and undeveloped for her age so it’s a wonder she even survived childbirth. It was so difficult for her that she never became pregnant again over the rest of her years, despite remarrying two more times. It is widely believed that she was physically damaged during the childbirth and was unable to conceive again, but it’s also possible she was too traumatized to ever put herself in that situation again. Either way, Margaret devoted herself to her son, calling him “my dearest and only desired joy in this world.”

The Birth of Henry Tudor occurred on January 28, 1457. The parents were Lady Margaret Beaufort and Sir Edmund Tudor.