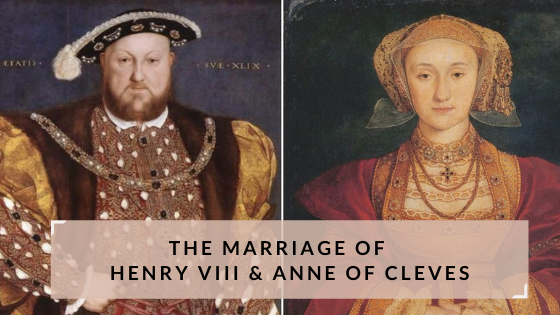 The Marriage of Anne of Cleves and Henry VIII

The marriage of Anne of Cleves and Henry VIII took place on 6 January 1540 at Greenwich Palace. Anne was the daughter of a German Duke and became King Henry’s fourth wife.

Henry’s third wife, Jane Seymour, had died on 24 October 1537 after giving birth to Henry’s only legitimate son, Prince Edward. Just one month after Queen Jane’s death, Henry re-entered the marriage market at the urging of his councilors, especially Thomas Cromwell. Although Henry had finally succeeded in siring a legitimate son, one son was not enough to secure his dynasty so it was imperative that he remarry and produce more heirs as soon as humanly possible.

Henry’s hunt for a new wife did not go smoothly. The unfortunate fates of his first three wives were well known across Europe and his fellow international rulers were none to eager to sacrifice their princesses to the ruthless king. Henry first made overtures to France but King Francis outright refused him. Next, Henry pursued Christina of Denmark, the Duchess of Milan, but she too refused to consider his proposal, telling the king’s envoy very plainly that if she had two heads “one should be at his Grace’s service!” Henry then turned his attention back to France and pursued Mary of Guise who avoided Henry’s proposition by swiftly marrying his nephew, James V of Scotland.

On 12 January 1539, King Francis and Holy Roman Emperor Charles V signed a treaty of alliance which pushed Henry to the fringes of European power. Thomas Cromwell hoped to regain England’s international influence by creating a new alliance with Germany, and there was no better way to seal an alliance than with a royal marriage.

In March of 1539, Henry sent an envoy to visit the court of John III, Duke of Cleves, who had two daughters of marriageable age, Anne and Amelia. Although Henry’s envoy was allowed to meet the two princesses in person, the girls were dressed modestly with veils covering their faces, so Henry’s men didn’t get a very good look. Cromwell dispatched Hans Holbein to Cleves to paint a portrait of Anne, with special instructions to make her look as appealing as possible. When Holbein returned to England with the portrait, Henry was completely enamored. The painting showed a beautiful young lady, eyes downturned and humble, with a pleasant countenance that thoroughly enraptured Henry.

By autumn 1539, the wheels were set in motion for the marriage of Anne of Cleves and King Henry. The marriage treaty was signed on 4 September 1539 and in early November, Anne departed from her home country to make the long journey to England. Her entourage of 263 attendants processed by land through northern Europe, arriving at Calais on 11 December 1539. The wedding of Henry and Anne of Cleves was to take place in London on Christmas Day, however, bad weather prevented Anne’s sailing across the Channel. It was not until 26 December 1539 that Anne’s entourage took ship from Calais and arrived in England after a seventeen hour trip.

Once in England, Anne and her entourage processed to Canterbury where she was greeted by Archbishop Thomas Cranmer and the Bishop of Ely. She then made her way to Rochester, arriving on 1 January 1540, where she was to lodge at Bishop’s Palace. Unbeknownst to her, her fiancé was about to make an unexpected arrival that would set their relationship off on the wrong foot and ultimately doom their marriage. When Henry showed up at Bishop’s Palace, Anne was shocked at his forthrightness and Henry was shocked at the lady who stood before him.
Clearly, Holbein had done his job too well and had painted a portrait overly flattering of the German princess.

Despite the disappointment in his fiancée’s physical appearance, Henry spent the afternoon in polite conversation with his future wife and only later did he unleash his rage against his councilors. Anne of Cleves was nothing as she had been described to Henry, in fact, he found her quite repulsive. Not only was her portrait obviously an untrue representation, Henry found her drab and boring. She was brought up in a very modest court which disdained music, dancing, and fashion, all of which were passions of Henry. Perhaps most insulting, Henry complained that Anne had excessive body odor.

Henry was in a very difficult situation. He couldn’t simply back out of the marriage or he would risk enraging the Duke of Cleves who could retaliate by declaring war on England. He desperately needed the German alliance as protection against France and the Holy Roman Empire. Between the couple’s first meeting on New Years Day to their wedding day, which was set for 6 January 1540, Henry constantly complained to his councilors and begged them to find a way to extricate himself from marrying Anne, but no legal means could be found.

On the morning of 6 January 1540, Henry and Anne were married in the Royal Chapel by Archbishop Cranmer. After the small ceremony, the newly married couple heard Mass together and then attended their wedding banquet in Westminster Palace. As for the wedding night, even Henry could not rouse enough passion to consummate their marriage. The next day he told his advisors that “he had found her body disordered and indisposed to excite or provoke any lust.”

By March 1540 Henry was desperate to rid himself of his newest wife. He told the Council that he was still unable to consummate the marriage, not because of his inability to be aroused but because of his strong aversion to his wife. He again begged them to look for ways in which he could be removed from the marriage, citing a possible marriage pre-contract between Anne and a prior suitor, the son of the Duke of Lorraine.

While Henry could not muster any passion for his wife, he suddenly became enamored with one of his wife’s ladies, Catherine Howard, and he kept no secret of it. The king’s councilors could see the writing on the wall and knew they had to find a way to gracefully detach him from his current marriage so he could marry the young Catherine Howard whose passion would surely end up with heirs.

As the Council worked to extract Henry from his current marriage, Henry was working behind the scenes on a punishment for the architect of the marriage: his Lord Great Chamberlain, Thomas Cromwell. When Cromwell walked into the Council meeting on the morning of 10 June 1540, he was arrested and sent by barge to the Tower of London. A bill of attainder was drawn up against Cromwell for treason and heresy and he was sentenced to death.

King Henry was desperate to rid himself of Anne, not only because he felt tricked into the marriage, but also so he could spend time with his new object of his attention, the young Catherine Howard. On 24 June Henry directed Anne to abandon Westminster Palace for Richmond Palace in rural Surrey. He told her there was an outbreak of the sweating sickness in the city and that he would join her at Richmond in a matter of days, but he never did. Instead he sent members of his Privy Council to Anne on 6 July to gain her consent for a divorce, which she willingly agreed to. Less than one week later on 12 July 1540, the official announcement was made that the marriage of Anne of Cleves and Henry VIII had been annulled.

Anne was the luckiest, or the smartest of Henry’s wives because she was one of the few that not only stayed alive but lived her life in the King’s good graces. After the King’s Great Matter in the 1520’s and 1530’s with his first wife, Catherine of Aragon, Anne of Cleves had readily agreed to all of Henry’s demands, to which he was grateful. He named her his honorary sister which gave her precedence over nearly all the women in the country. He paid her £4,000 pounds per year for her keeping, plus the manors of Bletchingly, Richmond, and Hever Castle. She was considered a member of the royal family and lived a very comfortable life in England but never remarried.

Within two weeks of his annulment with Anne of Cleves, Henry jumped into marriage yet again. He married his fifth wife, Catherine Howard, on 28 July 1540. She too did not turn out like Henry imagined and her alleged infidelity caused her to lose her head a year and a half later on 13 February, 1542.

Check out my other blog posts!