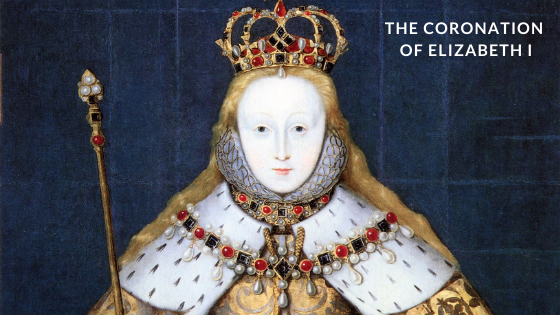 The Coronation of Elizabeth I took place on 15 January 1559 at Westminster Abbey in London.

Motherless and bastardized at age three. Held prisoner in the Tower of London for months by her own sister. Princess Elizabeth, the only child of King Henry VIII and Anne Boleyn, overcame great odds to become the longest reigning English monarch after Queen Elizabeth II.

Elizabeth I’s sister, Queen Mary I, died on 17 November 1558 after a rather disappointing reign. According to their father’s will, Elizabeth was to be her sister’s heir if she should die childless, which indeed she did. Elizabeth was living at Hatfield House at the time of her sister’s death. When a rider arrived at Hatfield to report Mary’s death and inform Elizabeth she was the new queen of England, she reportedly dropped to her knees and recited a line from Psalm 118: “It is the Lord’s doing, and it is marvelous in our eyes.”

Within a week of Mary’s death, Elizabeth left Hatfield House with a large personal entourage of at least 1,000 persons who would accompany her to London where she could formally claim her throne. Along the way, Elizabeth and her retinue lodged briefly at Barnet and then moved on to Charterhouse which stood just outside the city limits of London. Elizabeth made her official entry into London on 28 November 1558 at Cripplegate and then made her way to the Tower of London. This time she would lodge in the royal apartments as queen-in-waiting, not as her sister’s prisoner. Six days later, Elizabeth and her entourage traveled by royal barge to Somerset House where she stayed for eighteen days before moving to Whitehall on 23 December 1558.

By Christmas week, London was abuzz with preparations for Elizabeth’s coronation. Laborers were hard at work building multiple sets for the pageants, or tableaux, which were meant to entertain and communicate important messages from the people to their new queen. Huge quantities of fabric were being procured for the all the new clothes that would need to be made, not just for Elizabeth but for her courtiers and even their hundreds of mounts. Elizabeth showed early signs of frugalness by recycling two pieces from her sister Mary’s wardrobe, including her Parliament robes of crimson velvet with the matching cap of estate. That’s where the thriftiness ended. Elizabeth knew her position as the new queen was precarious so it was important to her to use this event to win the love of her people. She spared no expense for the lavish celebrations which were estimated to cost £16,000.

The official coronation festivities began on 12 January 1559 when Elizabeth and her party travelled from Westminster to the Tower via the River Thames. After a day of rest, Elizabeth emerged from the Tower around 2:00pm on 14 January to begin her coronation procession through the city. Accompanied by a huge retinue of lords, ladies, and city officials, the future queen was led slowly through the city, proceeded by trumpeters and royal heralds to announce her arrival. She was dressed in the richest fabric of cloth of gold and was transported through the city in a golden litter which was open so she could be seen by her new people.

Elizabeth’s procession made many stops along their parade route to watch the pageants performed in her honor. There were eleven pageants in all, five of them being major in scale and production. The first major pageant took place at Gracechurch Street where a three-story platform was built depicting Elizabeth’s genealogy. On the lowest tier stood two persons representing Elizabeth’s grandparents, Henry VII and Elizabeth of York. On the middle tier were her parents, Henry VIII and Anne Boleyn. On the top tier was Elizabeth herself crowned and holding the royal sceptre.

At Cornhill was the second major pageant which depicted the virtues of good governance, including true religion, love of subjects, wisdom, and justice. The topic of virtues was further explored in the third major tableaux at the corner of Soper Lane where eight children represented virtues like purity of heart, meekness, and mercy. Perhaps the most interesting pageant of the whole day took place at the Little Conduit in Cheapside. The elaborate stage contained two hills with opposing landscape scenes: a “Decayed Commonwealth” and a “Flourishing Commonwealth”, the former representing Mary I’s rule and the latter showed the hope the people had in Elizabeth as their new queen.

Elizabeth’s official coronation began on 15 January 1559 at Westminster Hall, which had been decorated sumptuously with her father’s tapestries depicting the Acts of the Apostles. When it was time for the ceremony to begin, Elizabeth processed from Westminster Hall to Westminster Abbey walking on a carpet of blue cloth which was later cut up and kept as souvenirs by the people in attendance. Once inside the chapel, she was greeted by Bishop Oglethorpe who led her to the stage and asked the people if they would have her for their queen, to which they responded “Yea! Yea!”. Then Elizabeth walked to the altar where she made the traditional offering. Next she sat upon the throne of estate as she listened to the bishop’s coronation sermon. After kneeling for the Lord’s Prayer, she was anointed by the bishop and then took her place on St. Edward’s Chair where she was invested with the official royal ornaments of state, including a sword, armils (bracelets), mantle, ring, scepter and no less than three crowns.

The new queen was a vision in gold from head to toe, sitting on a throne she probably never thought she would possess. The realization of her victory must have sunk in as each noble lined up to pay their homage, kneeling before her and then giving her a kiss on the cheek. At the completion of the coronation ceremony at Westminster Abbey, a massive coronation banquet was hosted at Westminster Hall. A beaming Elizabeth celebrated the accomplishment with her nobles, and “she drank all their healths, thanking them for the trouble they had taken” on her behalf.

Kramer, Kyra Cornelius, The Coronation of Queen Elizabeth I, http://www.kyrackramer.com/2019/01/15/the-coronation-of-queen-elizabeth-i/.

Starkey, David, Elizabeth: The Struggle for the Throne, (Harper, 2000).

Check out my other blog posts!