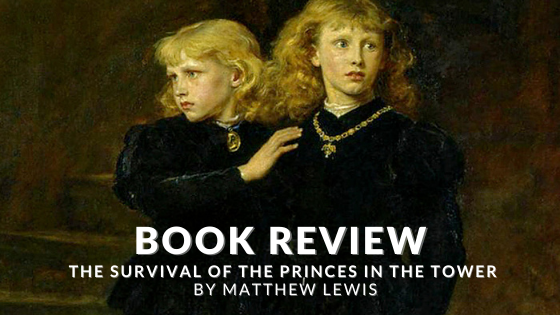 Book Review: The Survival of the Princes in the Tower by Matthew Lewis

The fate of the Princes in the Tower is one of the most enduring mysteries in the history of medieval England. Although its been over 500 years since the two sons of King Edward IV disappeared, the debate over their demise rages on today via social media and by today’s leading historians.  In The Survival of the Princes in the Tower, author Matthew Lewis seeks to debunk traditional beliefs that they were murdered and poses a different question: were they even murdered at all or were they smuggled out of the Tower and sent overseas to be raised in secrecy? 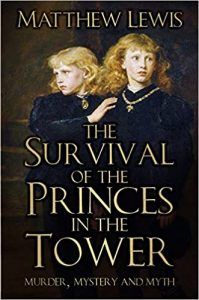 The Survival of the Princes in the Tower begins with the retelling of the dramatic events of 1483 to 1485, beginning with the unexpected death of King Edward IV, the circumstances which brought Richard to the throne, the disappearance of the Princes in the Tower, and the loss of Richard’s crown to Henry Tudor at the Battle of Bosworth. The author asserts that the accounts of these events which we accept as true today were written by chroniclers who were heavily biased towards the Tudors and therefore do not tell the true story. Although the author admits that there is little to no firm evidence about the fate of the Princes in the Tower, he uses this book to examine the other possibilities that existed beyond murder.

Admittedly, I came into this book biased towards the traditional story that Richard III killed the Princes in the Tower. Nevertheless, as a responsible historian I think it is imperative to keep an open mind. It’s important to evaluate the perspectives of other historians, especially if they have a new approach or a difference viewpoint.

Matthew Lewis is a well-respected Ricardian and was recently named as a Chairman for the Richard III Society, therefore, I expected an ardent defense of Richard III. I was hoping to be swayed at least a little bit by Matthew’s view but overall I found his arguments to be a stretch. I subscribe to the theory of Occum’s Razor, the scientific and philosophical theory which states that the easiest explanation is usually the correct one. When reading this book, I felt that the author was taking some big leaps to draw his conclusion that the Princes in the Tower were not murdered and instead escaped to challenge Henry VII to the throne as Lambert Simnel and Perkin Warbeck.

The author begins by dissecting the chroniclers who wrote negatively about Richard III and blamed him for the deaths of the Princes in the Tower. Lewis focuses on Sir Thomas More’s account of the reign of Richard III, which More never finished and never intended to publish. Lewis contends that More didn’t complete his book about Richard III because he found out the truth – that Richard wasn’t responsible for the deaths of his nephews. I found this to be purely conjecture as there is not a single shred of evidence that More was privy to their fates. More likely, Thomas stopped working on the book because he was an incredibly busy man. He began writing the history of Richard in 1513 but stopped in 1518 which also happened to be the year he gained notoriety for his negotiation skills with England’s nemesis, France, and more importantly, he became a member of the King’s Council which kept him very busy indeed.

Next, the author points to Elizabeth Woodville’s actions as evidence that Richard couldn’t have murdered the princes. Lewis puts forth the theory that Elizabeth would have never agreed to let her eldest daughter, Elizabeth of York, marry Henry Tudor if she thought her two sons were alive since they would have been the rightful heirs to the throne. Matt suggests that Richard must have told her the boys had been safely smuggled out of the kingdom and were living in relative safety abroad until they came of age. He also asserts that Sir James Tyrell coordinated secret visits between Elizabeth and her son at his family home of Gipping Hall in Suffolk. There is no solid evidence short of a story told in a relatively obscure book called The Mystery of the Princes by Audrey Williamson.

The author also theorizes that Elizabeth would have never come out of sanctuary and handed over the care of her daughters to Richard if she thought he had murdered her two sons. It is the author’s opinion that the only logical explanation would be if it was proven to Elizabeth that her sons were indeed alive and safe. I believe there is another more likely scenario. I believe Richard had grown impatient with Elizabeth’s prolonged stay in sanctuary and reached the end of his rope. He needed to repair his reputation as a ruthless usurper and having the dowager queen hiding in sanctuary in fear of her life and that of her remaining children was a black mark on Richard’s character. Furthermore, it was announced on Christmas 1483 that Henry Tudor and Elizabeth of York were betrothed, meaning Elizabeth Woodville was able to conspire against him behind the safety of sanctuary. He needed to flush her and her children out of sanctuary so he could gain control of the situation and stop any further plotting against him. During the entirety of Elizabeth Woodville’s stay in sanctuary, Richard sent many messengers requesting that she leave sanctuary but she always refused. Finally Richard had had enough and sent a final messenger to tell her she had one last chance to acquiesce peacefully and if she chose not to, she and her children would be removed forcibly and would be out of favour with the king. With little other choice, Elizabeth agreed to Richard’s terms but only after he made a promise that no harm would come to her children.

The bulk of The Survival of the Princes in the Tower deals with two infamous challengers to Henry VII’s crown: Lambert Simnel and Perkin Warbeck. Rather than the widely accepted story that these two young men were pretenders, the author believes they were really Yorkist princes. In his opinion, Lambert Simnel was actually Edward, Earl of Warwick, the son of George, duke of Clarence, who he believes was spirited away from the Tower and replaced with a random boy of his age. The author also believes Perkin Warbeck was the real Richard of Shrewsbury, the younger of the two Princes in the Tower, supporting his claim that at least one of the princes was not murdered.

Personally, I do not believe this is the case or else he would have undoubtedly had more support from English citizens who had been loyal to the house of York. Futhermore, Richard was ten years old when he disappeared from the Tower. His appearance and traits would have been well known and it seems impossible that he would be unrecognizable only eight years later when Perkin Warbeck first came on the scene.

If you are interesting in learning about alternative possibilities, this book is an interesting read, although it did not change my mind about the fate of the Princes in the Tower.

Want more? Check out my other Tudor book reviews.