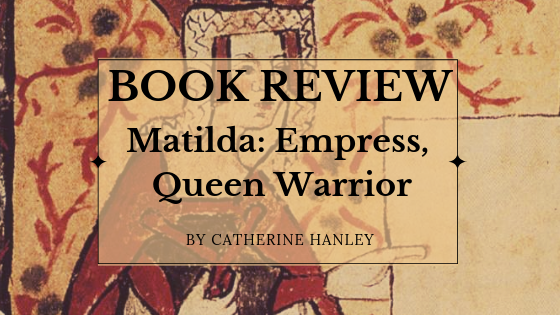 Most of the tales of history we’ve been taught growing up have been the stories of men, not women. While there is no doubt powerful women existed and exerted their influence over government just as much as the men, chroniclers did not as readily record the actions of women because quite frankly they weren’t considered important. That has finally begun to change with the release of several new books in the past few years that focus on the famous and infamous women of different time periods, including Helen Castor’s She-Wolves, Young and Damned and Fair: The Life of Catherine Howard, Fifth Wife of King Henry VIII by Gareth Russell, and Margaret Tudor: The Life of Henry VIII’s Sister by Melanie Clegg. These new books focus exclusively on the lives of these powerful royal women, bringing to light their strengths, weaknesses, successes, and failures, independent of the men in their lives.

In this book review I’ll be covering Matilda-Empress, Queen, Warrior by Catherine Hanley which was released in April 2019. I came across this book when I was starting a research project on Matilda and was struggling to find any full biographies of the would-be queen. I’m so glad I found this one, in fact, it was the best of the three books I read on Matilda. Although the author is very clearly a fan of Matilda, she includes lots of scholarly research and typically reached the most logical conclusions when their was lack of evidence. I also like that she compares and contrasts stories from different chroniclers. That gives the reader insight into the historian’s thought process plus it gives the reader different sides of the story so that we can make our own determinations as well.

Matilda was the only legitimate daughter of King Henry I of England who ruled from 1100 to 1135. Henry’s other legitimate child, William Adelin, died during the sinking of the White Ship in 1120. Then, quite unusually, King Henry declared that his daughter Matilda would be his heir to the kingdom of England. Never before had a queen ruled England and as might be expected there was great resistance. But Matilda was a fighter and she was very stubborn. She would never give up her claim or the inheritances of her sons, even when her own cousin Stephen seized the throne after Henry I’s death. Despite years of fighting between Matilda and Stephen (The Anarchy 1135-1153), Matilda herself would never sit upon the throne of England. Her eldest son, Henry, however would reap the benefits of her struggles by taking the crown back from Stephen in 1154, becoming King Henry II of England. Henry II was the very first Plantagenet king – his mother Matilda had married Geoffrey, duke of Anjou. The name Plantagenet originated with Geoffrey who was known for wearing a sprig of the plant “planta genista” in his hat. Over time “planta genista” turned into “plantagenet” and the name was adopted to describe this branch of the royal family. In all, the House of Plantagenet produced fourteen kings of England, from Henry II to Richard III.

This is the first book I’ve read by Catherine Hanley and I thoroughly enjoyed it. Her writing style was very easy to follow and for that reason I think this book could appeal to a wide audience of history readers. The author did a great job telling the full biographical story of Matilda, even though there was a real lack of source materials (we don’t even know what Matilda looked like). This book comes in at 296 pages and I found it to be a faster read than most historical nonfiction due to the pleasing nature of the author’s writing style. If you’re interested at all in Empress Matilda and her struggle to become the first queen of England, I highly recommend picking up Matilda-Empress, Queen, Warrior by Catherine Hanley. 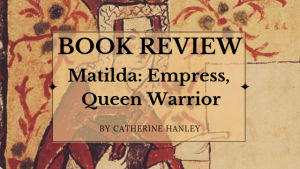