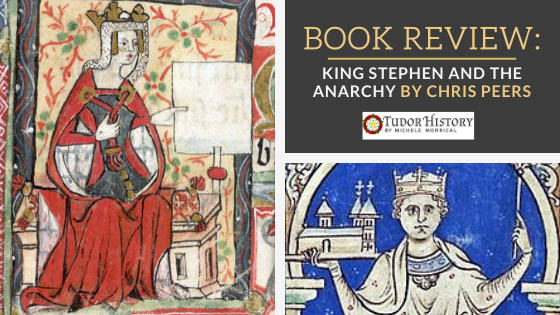 Book Review: King Stephen and the Anarchy by Chris Peers

The time was medieval England and the place was an open field on the outskirts of a very frightened village. Two enormous armies had appeared on the horizon and promptly lined themselves up in battle array, preparing to do face off not with foreign enemies but with their very own kinsmen: cousins against cousins, sons against fathers, and so on.

No, this isn’t the Wars of the Roses. It’s the original Wars of the Roses: the Anarchy, a nineteen-year civil war that erupted in twelfth-century England and France after the death of King Henry I of England. 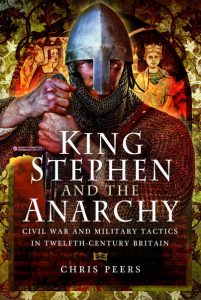 Chris Peers sets out to tell this epic story of the struggle for the throne and the woman who was almost the first queen of England in his book titled King Stephen and the Anarchy: Civil War and Military Tactics in Twelfth-Century Britain. This book was was published in 2018 by Pen and Sword Books.

In his book, Mr. Peers takes us on a chronological journey of events beginning with a short background on William the Conqueror, the Norman Conquest, and the reign of King Henry I. He then launches into the story of Empress Matilda and the usurper King Stephen I.

Henry I was the youngest son of William the Conqueror and Henry ascended the throne of England in 1100. Henry was married to Matilda of Scotland and they had two children: William Adelin and Matilda. William Adelin had been raised to be Henry’s heir but the unfortunate teenager died in 1120 with the sinking of the White Ship.

Many years later after failing to produce any male heirs with his second wife, Adeliza, King Henry gathered his magnates, declared his daughter Matilda as his official heir, and had them each swear an oath of honor to uphold her claim upon his death. But when Henry died, the oaths sworn to his daughter Matilda were not upheld at all.

Matilda’s cousin Stephen, Henry I’s favorite nephew, took advantage of his close proximity to England to make a grab for the throne. Stephen and his retinue quickly sailed to England, took control of the royal treasury, and had himself hastily coronated on December 22, 1135. Matilda would spend the next nineteen years campaigning against Stephen to take back her inheritance, forcing the barons of England and Normandy to choose sides that often had devastating consequences.

As a writer and historian myself, I read a lot of books. Often I’m forced to read boring, old, overly academic books that no normal person would be interested in reading. So I always keeping my eye out for new releases that are both historically accurate but also easy-to-read and entertaining. That is exactly what I found in Chris Peers’ book entitled “King Stephen and the Anarchy”.

I think this is an excellent book for readers with no prior knowledge of the subject because the author is quite good at making confusing situations understandable and doesn’t get bogged down in extraneous details. For those readers who already have a good base knowledge of the time period, there is still new information to glean, especially if you have an interest in the military aspect of the Anarchy. Mr. Peers provides us with detailed descriptions of castles and siege strategies, how armies were structured, what soldiers of that time period wore and what weapons they used.

In summary, if you have an interest in learning more about Empress Matilda, the almost-first-queen of England, and her cousin Stephen who usurped her crown and would later pay the price, I can’t recommend this book enough. It is one of the easiest on the Anarchy that I have read and he is careful to use credible sources to back up his story.